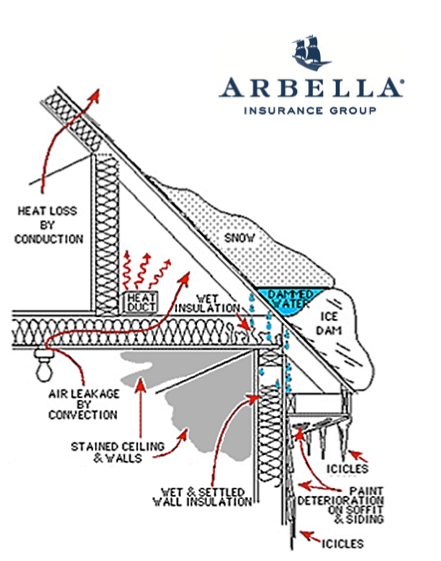 Arbella Insurance recently posted that significant snow events, such as the one New England encountered earlier this week, can often result in dangerous and destructive ice dams. Ice damming occurs when water from melting snow runs down the surface of a roof and re-freezes. As it re-freezes, ice builds up and begins to “dam” the subsequent run-off. Roof shingles are designed to shed water, not handle pooled water. Some of the pooled water finds its way under shingles and can refreeze, lifting the shingles from the roof deck and creating an avenue for the water to enter. This scenario is caused by warm air in the attic space, heating the undersurface of the roof deck and melting the snow. The run-off makes its way down the roof and eventually comes in contact with the deck over the eaves, which is not exposed to the heat from the attic. This is where the ice generally begins to form.

Here are some ways to prevent ice dams from forming this winter:

• Keep gutters clear of debris and snow, including the bottom of the downspouts so that when the snow begins to melt the water may flow freely.
• Roof rakes can be used to remove snow from the roof and gutter line. BE EVER MINDFUL OF THE PRESENCE OF ELECTRICAL WIRING WHEN USING A ROOF RAKE.
• Remove the build-up of ice:
o If you use a ladder to access this area, have a partner hold the ladder steady and
watch for falling icicles.
o If you have to chip the ice away, never use an axe or hammer (or anything that
may damage the shingles) and again, always be mindful of the location of all
electric wiring.
o If you are uncomfortable, or believe the situation is unsafe, consider hiring a
licensed and insured contractor to complete the work.
• Use a melting agent like calcium chloride, which is one of the most common agents
used. For added effectiveness, we suggest placing it in a nylon stocking, which allows for the agent to remain in place for a longer period of time and to be released gradually, extending the melting process.

Join our Newsletter
For Email Marketing you can trust.